How to Brew Beer in New England 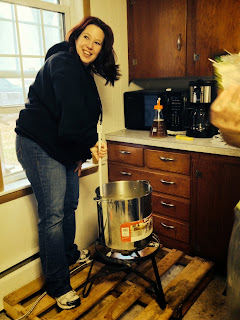 How to Brew Beer in New England
by Lisa Saunders
Anyone with a stove can brew beer—it’s not that hard and it doesn't cost much to get started. Our forefathers brewed it--George Washington and Sam Adams just to name a few. The Vikings even learned how to brew it at sea.

New Englanders (lobster eaters anyway) already own one of the largest pieces of necessary equipment—a stock pot for steeping the grains and boiling the brew. Recently legalized in all 50 states, everyone from President Obama to the lady next door is brewing beer.

Although it continues to grow in popularity with people from all walks of life, according to Chris Timmann, co-owner with his wife Melissa of Craft Brews Supplies in Wyoming, R.I., “Chefs, chemists and engineers get particularly excited about the science behind different varieties.”

Melissa, pictured above brewing beer,  added, “Many of my girlfriends enjoy making beer, too. Their husbands have no clue how it’s done, and some don’t care—but they sure love having a fresh, tasty supply of inexpensive beer in the house.”

Beer has been an important and vital medicinal drink throughout the ages and was used as scurvy prevention when infused with spruce needles or other vitamin C containing ingredients. The Mayflower passengers certainly wouldn’t have left England without it (read more about it in the historical—and sometimes hysterical--adventure book, Mystic Seafarer’s Trail).
Homebrewer Alex Buckley, a field service engineer who loves history, searches for historic brews online. He said, “A lot of homebrewers are getting interested in recipes that our ancestors brewed and try to brew them using the ingredients that they had available to them.” Beer brewing recipes are available everywhere--including on an ancient Mesopotamian tablet--and even one of George Washington’s homebrewing recipes can be found online.
The White House also publishes their beer brewing recipes. Sam Kass, author of the White House blog post, “Ale to the Chief: White House Beer Recipe,”  states, “As far as we know the White House Honey Brown Ale is the first alcohol brewed or distilled on the White House grounds.” Like many homebrewers, after working with a recipe from a local brew shop, the White House added a “secret ingredient” to make their beer unique. In their case, they add honey tapped “from the first ever bee-hive on the South Lawn. The honey gives the beer a rich aroma and a nice finish but it doesn't sweeten it.” This White House Honey Ale recipe from the blog post, which includes an excellent video of how beer is made, will give you an idea of the whole brewing process from start to finish (see: http://www.whitehouse.gov/blog/2012/08/29/ale-chief-white-house-beer-recipe):

More than one million Americans brew beer at home. You, like the current president, can join them right away by purchasing a homebrewing kit for your kitchen. Beer making equipment kits for brewing five gallons (48, 12-oz. bottles) cost from $89 - $203 depending on how many time-saving gadgets you want, and the ingredient kits range from $38-60, depending on the kind of beer you want. Not an expensive way to launch a new hobby that will ensure you have an inexpensive, ready supply of beer in the house.

Chris of Craft Brews Supplies said that a homebrewer can complete his first batch of beer within three hours of bringing home the needed supplies—and that includes clean up time. Within a month, the beer will be ready to drink. Although Chris admits yeast does not wear a watch, you can expect the following timeline for your brew (but the actual time from boiling to drinking your brew depends on the style of beer you are making): 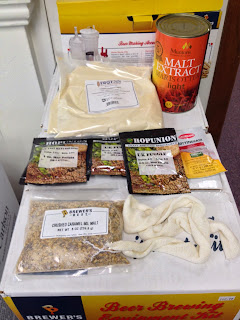 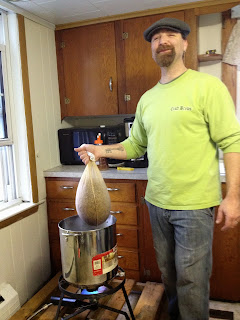 Chris holds up the steeping bag containing the malt to let the excess fluid drain out after he has let it steep for 25-30 minutes at 155 degrees F. Steeping the malt (grain) is similar to steeping tea. Chris then throws the spent grain in his garden to use as fertilizer. Some brewers use spent grain to make bread, pretzels, pie crusts, and even dog biscuits. 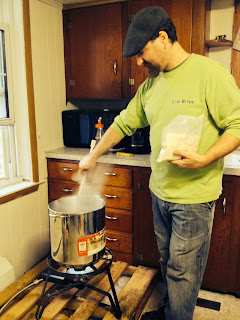 Christ stirring the boiling wort in preparation to pour in the malt extract--a processed sugary malt product that is ready to use. 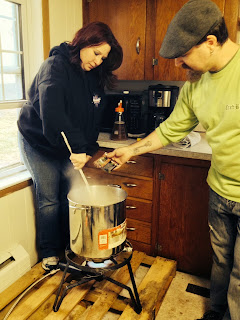 Although one person can handle the whole operation, Melissa stirs while Chris pours in German Hallertau Hop pellets.

Chris said, “Homebrewers like to share beer and push the envelope with their creative recipes by adding unique flavorings from star anise to pine needle to coffee to bourbon soaked oak chips. There are also the brewers that like to stay the way of traditional brewing and try to emulate the brewers from centuries past.  We start any beginner brewers off with extract brewing, which uses the malt extract as the sugar base. There are also advanced homebrewers that use no malt extract, but rather extract the sugars from the grains in a process called mashing. This is called all-grain brewing--a much more involved but exact brewing method.”

If you know the style of beer you want to brew, you can call someone like Chris and he will prepackage the ingredients for you accordingly. “Many of the recipes of popular, commercial beers can be cloned from online recipes. The homebrewed beer won’t taste exactly the same because of equipment and storage differences, but it will get pretty close to the flavor you are looking for.“

Chris and his wife, Melissa, enjoy making beer every weekend to try new recipes for their monthly newsletter. They host four beer competitions a year where they invite brewers to submit their best for a taste testing among themselves. The winner takes home a gift certificate to their shop.  Melissa said many of their customers have become friends as they enjoy tastings and sharing their favorite recipes with each other.  Chris and Melissa publish their recipes, such as their “Winter Wass-ale,” a brew that includes cinnamon and nutmeg, on their website.

According to Chris, the basic ingredients for beer can be purchased separately or in a prepackaged kit:

·        Malt--a dried grain such as barley, wheat or rye, that provides the sugar base for the yeast to eat (a process called fermentation), which creates the alcohol.

·        Hops--the bitter, female flowers (also called cones) of the hop plant that offsets the sweet of the malt. In addition to balancing the inherent sweetness of beer, hops also act as a preservative. Hops are sold as compressed green pellets or dried whole cones.

·        Yeast--a single-celled fungus that ferments sugars and other carbohydrates.

The primary ingredient of beer, of course, is water. Most any kind of water will do without treating it, but the water quality can affect the taste of beer.

The following basic equipment, which can be purchased separately or in a kit, is needed to make a 5-gallon batch:

Primary fermentor: Usually a large plastic pail—needs to hold an extra gallon or so to accommodate the foam that forms during fermentation (known as Krausen).

Cover: An airtight lid to place over primary fermentor.

Carboy: A large glass (or plastic bottle) that is used as the secondary fermentor.

Fermentation lock: Also called a water seal. It’s a device that fits into the carboy to allow carbon dioxide to escape without letting oxygen in.

Hydrometer: This is used to measure the density of the wort and beer in regard to the amount of fermentable sugar at various stages of fermentation.

Bottles: Bottles are long-neck for ease of capping. Popular sizes are 12 and 22 oz.

Capper: A little device that helps you clamp on bottle caps.

For more information about beer brewing or beer brewing supplies, contact Chris or Melissa of Craft Brews Supplies at 401-539-2337, or visit: www.craftbrewssupplies.com.

For folks who are serious about learning how to brew beer, Chris recommends the following books: “How to Brew” by John Palmer and “The complete joy of Home Brewing” by Charlie Papazian.
Who knows, if not drunken to excess, beer just might save your life someday. During the age of the Egyptian pharaohs, it was prescribed to treat scorpion bites.

For free online brewing instructions, visit the American Homebrewers Association at www.homebrewersassociation.org. This website includes information on every state’s law regarding homebrewing. Though homebrewing is legal in every state, it is not legal to sell home brewed beer. 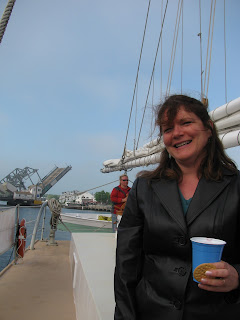 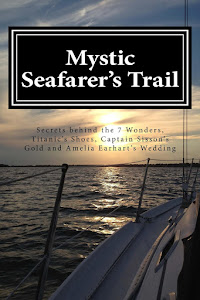